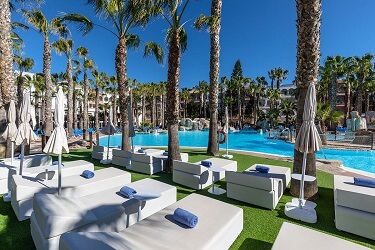 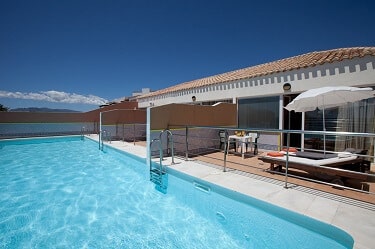 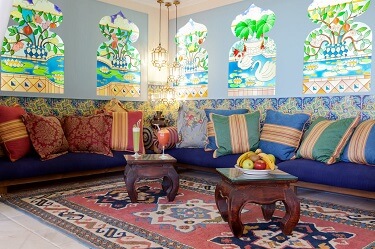 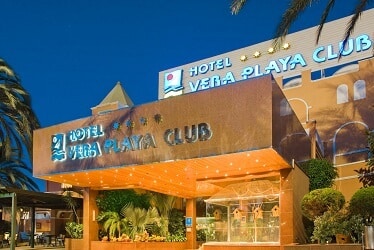 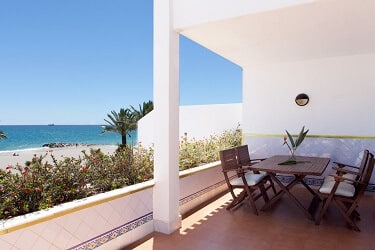 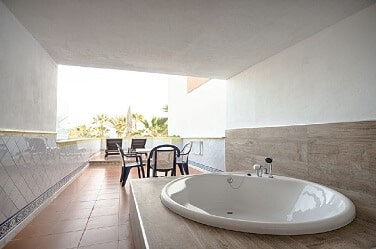 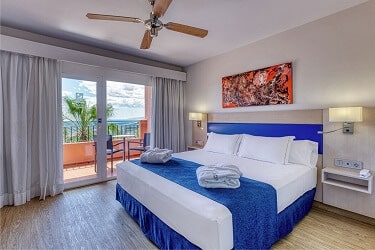 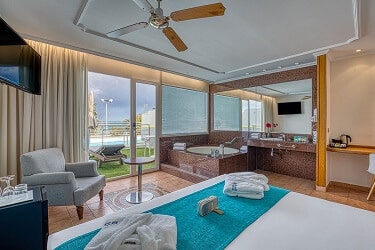 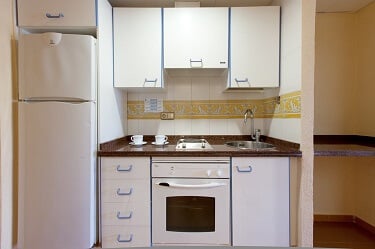 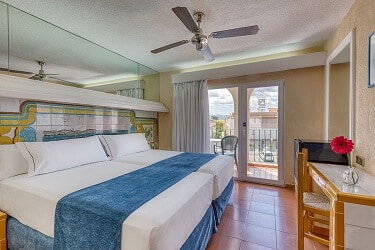 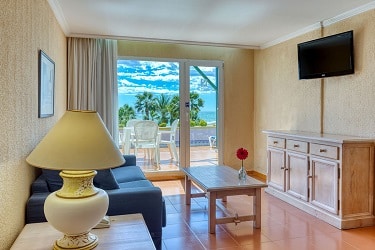 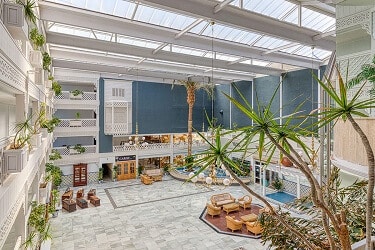 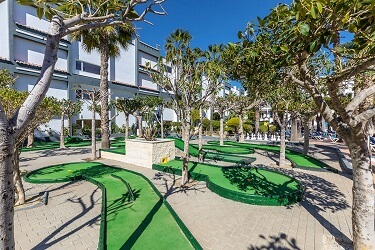 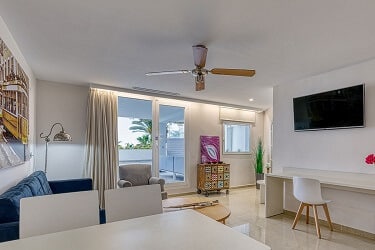 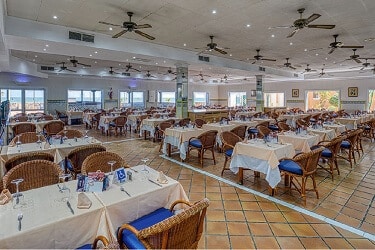 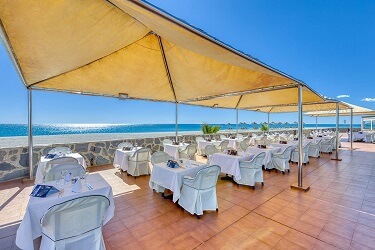 Journalist John de Graaff has been here recently and wrote a nice article about Vera Playa on its website purely naturism. Click here to read this article.

It offers guests great comfort and service. Vera Playa Club offers 281 rooms spread over 4 floors to include: hotel rooms, studio’s, suites, Presidential suites and apartments. Because of the special construction has the hotel has a spacious courtyard, Wherein a special form and large swimming pool is set in a garden with palm trees.

Hotel Vera Playa Club offers apartments and hotel rooms. You can stay based on a lodging, bed and breakfast, half board, Full board and (+) books. All units have a refrigerator, safe, airco, ceiling fan, Double glazed, Sat. TV, phone, bath with garden tub, shower, hairdryer and toilet. The beds are 2 meters long. The Suite Playa’s have with 3 Suites 1 pool available and the Presidential Suite has its own pool. Studios and two-room apartments have a kitchen. All apartments have a balcony or terrace. Some have sea view and others have a view over the beautiful courtyard and pool.

Special features:
– We can arrange flights and / or rental car for you
– At dinner is expected that the gentlemen appear in long trousers
– After 20.00 ‘o colck are expected put on some clothes in the hotel

Services:
– Free sunbeds at the pool
– Lockers for rent
– Sunbeds and parasols for rent on the beach
– Beach towels are available against a deposit at the reception
– Restaurant, Snackbar, Beach Grill with covered terrace
– Bicycle rental
– Internet Service
– 24-hour front desk
– Barber
– Launderette

Please note that not all facilities are open in the pre- and late season.

– It is based on bed and breakfast, half board, Half Board Plus and Full board offered. Breakfast is buffet style and at dinner you can choose from a variety of hot and cold dishes.

Flight:
It is about 2 hour and 40 minute flight to Alicante and 2 hour and 50 minutes to Almeria. We can book your flights. We mediate among other Transavia, KLM, Iberia Vueling. Hotel Playa Bonita, every Tuesday and Friday from 5 May, a private charter with Germania at Almeria. We can offer: from € 310.- pp including 20 kg baggage.

We advise you to rent a car to see as more of the region. Internatuur mediate for Sunny Cars from Almeria and Alicante. There are many rental companies, ask our staff for advise.

Transfer:
If you prefer a transfer from the airport, we can arrange this for you from Almeria. Price € 210 Return to 1 person, € 230 Return to 2 people. Transfer to the charter of Hotel Playa Natura is cheaper. You paid more than € 30 per person including service fee.

The Costa de Almeria is less known in the Netherlands, but has surprising contrasts in the landscapes, has an average year temperature of 20º C and beautiful golden beaches. In a picturesque corner of the Mediterranean, you’ll find the naturist center Vera Playa , where among other things. on the seafront, Hotel Vera Playa is situated. The water is noticeably warmer than the water on the Costa del Sol, The nude beach is about 2 km long. The nearest places are Garrucha and Vera. Garrucha was originally a small fishing port with a promenade with several fish restaurants and market stalls.

Costa de Almeria means for the traveler a true discovery with surprising contrasts and very divergent landscapes. Slightly North of Almeria is the place Tabernas “Mini Hollywood” . Mini Hollywood consists of 2 wild west villages, where many ‘spaghetti westerns’ are filmed.

The city Almeria is often called ” Mirror of the Sea “and has an Arabic charisma.

The natural area ​​Karst in Yesos de Sorbas has a unique underwater world, formed by stalactite in this gypsum plateau.

In the desert of Tabernas are recorde some famous Westerns, Min-Hollywood is a recreated western town, where among other things. Lawrence of Arabia is recorded.

From here can you drive to Granada, with his world famous Alhambra. The next places are worth a visit: Mojacar the birthplace of Walt Disney and Nerja in the foothills of the Sierra Nevada where you can find a beautiful cave.

Specialities:
At the coast of Almeria is particularly in the summer usual to eat in tapas bars. Of course there is also a wide range of seafood restaurants along the coast. Suggestions are: fish soup with seafood and mayonnaise, gazpacho (cold tomato soup with garlic)

Language:
Spanish is the official language. Thanks to the tourism speaks a lot of Spanish people also Englisch of German.

Currency:
Spain is a member of the European Union. The official currency is the Euro. With almost every card is it possible to withdraw money and most credit cards are also accepted. The nearest ATM is located at the entrance of Vera Natura, this is next to Natsun.

Climate:
The Costa de Almeria has approximately 3000 sunny hours per year, this is typically Mediterranean with mild winters and warm summers.

Winter is barely, outside the summer it seems one long spring.

Apartment with separate bedroom and a kitchen 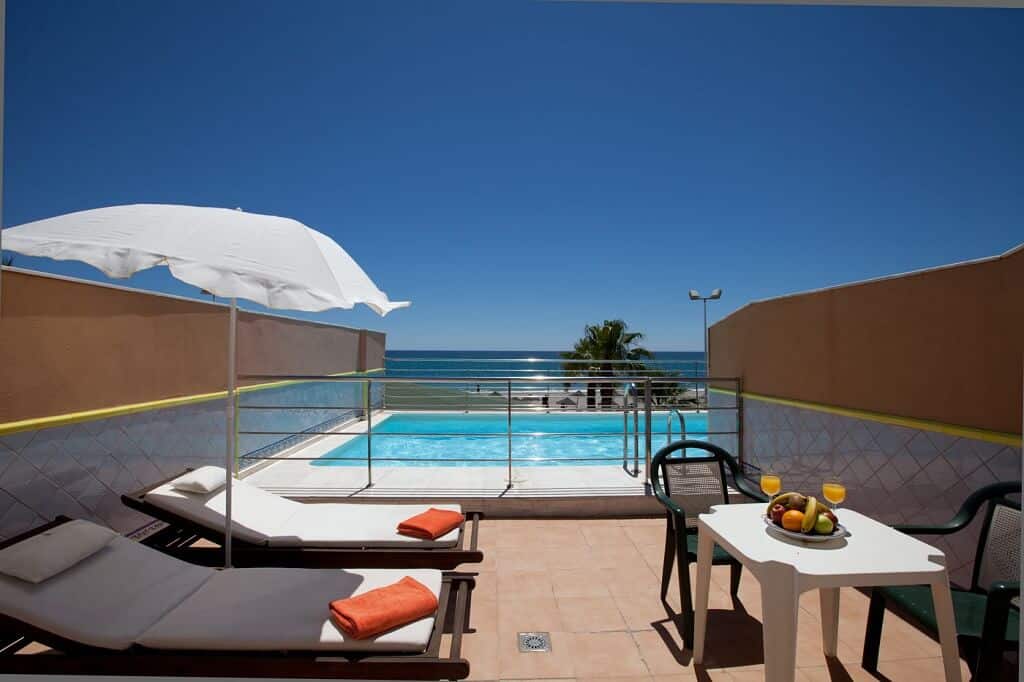